This month we had a pleasure to interview our member, Sam Varteniuk. 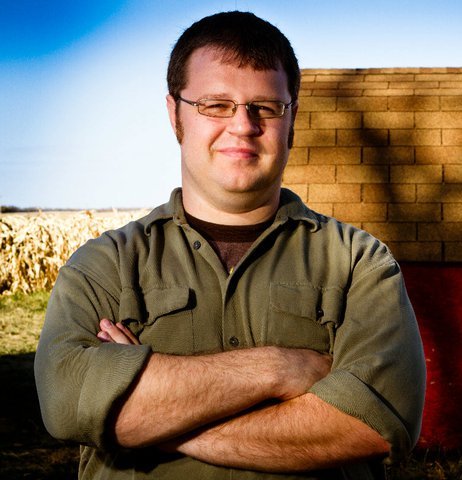 Sam is General Manager of The Registry Theatre, and Artistic Director of JM Drama Alumni. He has spent 15 years writing, directing, producing, and starring in stage plays, short films, and sketch comedy.  Sam’s company Mostly Water Theatre was a staple of the Edmonton International Fringe Festival, and he has been a regular contributor to CBC Radio’s The Irrelevant Show.  His history of community creation and education stretch from academia (graduate degree in Drama from the University of Alberta) to institutions like Edmonton’s Walterdale Playhouse and Kitchener’s JM Drama Alumni, where he currently serves as Artistic Director.  Sam spent three years as an Artistic Associate at the Citadel Theatre in Edmonton, AB, facilitating talkbacks and delivering pre-show lectures to groups of seniors and students.  Sam has worked extensively in the world of Drama Therapy/Theatre for Social Change, collaborating with mental health organizations, seniors’ communities, and newcomers to Canada to tell their stories; he recently embarked on another such collaboration with KW’s Extend-A-Family. He is currently the General Manager of The Registry Theatre in downtown Kitchener. He also programs the Dance at the Registry series.

Who/what inspired you to get involved in the arts?

I was not inspired so much as required. My entire grade three class was compelled to audition for a production of Danny the Dark Green Dinosaur; I scored the role of Sonny Skunk. I then forgot about acting until grade six, when another compulsory audition led to the role of Detective Flynn in a production of The Case of the Missing Cousins. I enjoyed both experiences, but promptly forgot about my love of acting again until grade ten, when a teacher approached me in the hallway and said, “You look like a cop. Want to be in a play?” And so it came to pass that I played Officer Krupke in Westside Story. By the time I got to university I had finally retained the knowledge that I enjoyed performance; I arrived just in time to see the school’s drama program cancelled. I had to produce my own shows in order to get my acting fix, and have been presenting myself - and others - ever since.

From your experience, what do you see as your role in presenting performing artists?

In a strictly functional sense, to organise and facilitate as pleasant an experience as possible for all involved, from the artists travelling to my city, to the audience buying tickets and visiting my theatre, to the sponsors and volunteers that support it. In a business sense, arts presentation enhances quality of life for members of the community, making neighbourhoods more attractive places in which to play, work, and live. From a philosophical point of view, I believe that sharing stories of the human experience is the first, best, and only way for people to learn, grow, and thrive. I consider it an honour to be part of that process.

What do you consider your proudest moment as a performing arts presenter?

In February of 2013 I presented Old Men Dancing, an amateur dance troupe that is precisely what it sounds like. The Old Men were far from tour-ready, and spent months preparing and rehearsing for the gig. Dance at The Registry is still building audiences; I’m typically pleased if I can fill one-third of my 150 seats. Old Men Dancing packed the house. The outpouring of affection both during and after the show was astounding. To this day, every time I walk into the theatre, I can still feel the warm glow of that tremendous evening.

What are the biggest challenges facing you as an arts presenter in Canada?

Money, I suppose, but that’s boring and who really wants to talk about that? I’d rather say finding a way to engage an audience that is increasingly finding entertainment on computers and handheld devices. I want to clarify that I am not a technology hater - quite the opposite. I love technology, and I don’t think it’s a poor substitute for what some call “real” (i.e. face-to-face) human interaction. Technology is just another way for people to connect, and I’m all about people connecting. I see a lot of efforts to fuse technology - social media, in particular - with live performance: projection, live tweeting, efforts to collectively write plays online. We haven’t quite figured it out yet - how to actively engage with each other in real life in a way that includes our smartphones - but we will. When we do, you can look forward to seeing it at The Registry Theatre.

What are the main benefits of your work to your community?

Meeting people, and having them meet each other. I am thrilled whenever I introduce two artists or presenters who end up hitting it off and forging their own relationship. I especially like getting people involved who don’t identify as artists. I’m convinced that, at some point in their lives, everyone harbours an artistic ambition. I love how people’s faces soften and brighten when they talk about how they used to dance in high school, or the garage band that only lasted for one summer. You get to meet a whole new person.

If a sudden crisis caused your organization to disappear from your community, what would be missed?

The most accessible, affordable rental venue in the Waterloo Region, and a central hub of music, theatre, dance, film, and everything in between. We are a critical element in the cultural ecosystem, particularly for emerging artists. There are several companies in the region that can only afford to present because of the low rental rates offered at The Registry. If we disappeared, they would be hard-pressed to find an alternative venue, and might even be forced to close up shop entirely.

February 2, 2021
Ontario Presents and its member presenting organizations recognize the importance of presenting Indigenous artists, stories and culture as part of their presenting practice. As we continue to encourage the respectful presentation of...

January 29, 2021
Ontario Presents and its member presenting organizations recognize the importance of presenting Indigenous artists, stories and culture as part of their presenting practice. As we continue to encourage the respectful presentation of...

January 8, 2021
Ontario Presents and its member presenting organizations recognize the importance of presenting Indigenous artists, stories and culture as part of their presenting practice. As we continue to encourage the respectful presentation of...
END_OF_DOCUMENT_TOKEN_TO_BE_REPLACED