This month we sat down with comedian Chad Anderson. 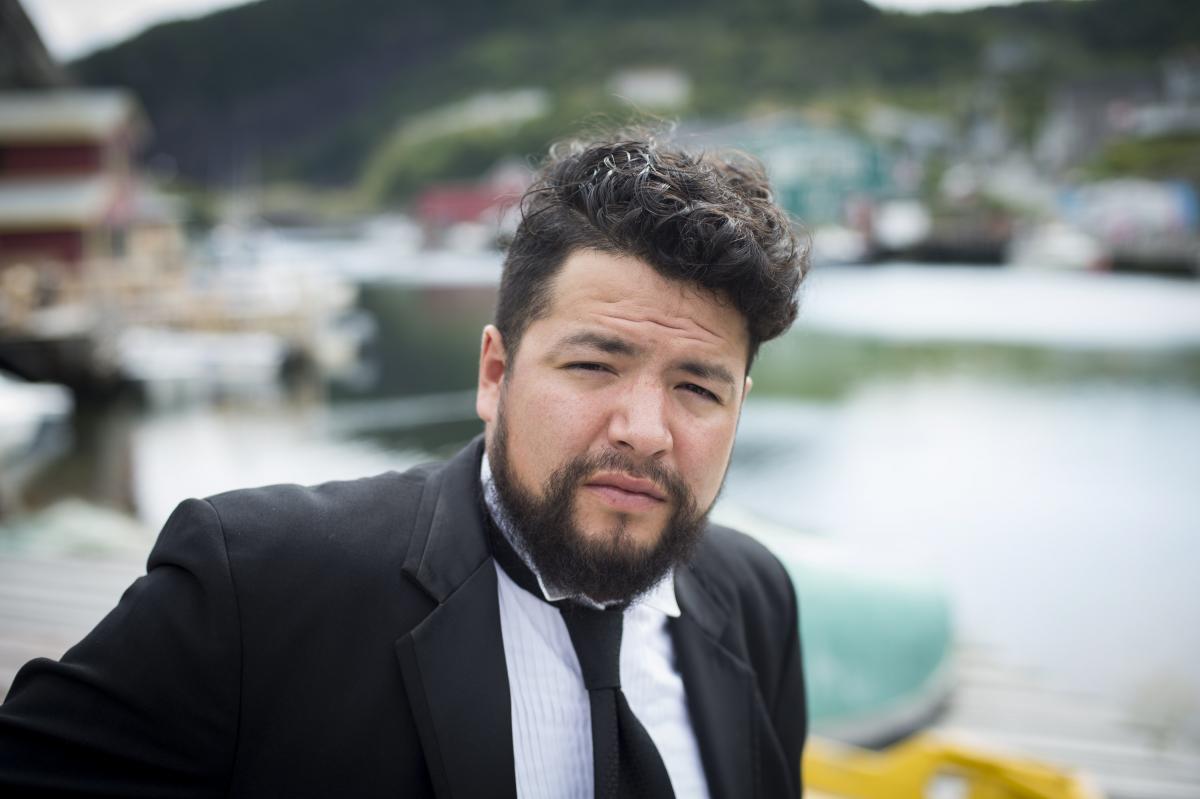 To start off, can you tell us a bit about yourself and your artistic practice?

Well, my name is Chad Anderson, I’m Cree and originally from The Pas, Manitoba. I started doing stand-up comedy when I moved from my hometown to Winnipeg, Manitoba in 2008.

I’ve always been drawn to humour and as a child enjoyed being the center of attention by making my peers and family laugh by being silly. Once I got a little older, I was drawn to stand-up comedy and really enjoyed watching it whenever I could. I used to turn on the comedy channel when I got home from high school and watch re-runs of Just For Laughs.

When I was 18 there was a contest called the Great Canadian Laugh-Off where people would submit videos online of themselves doing their best five minutes in front of the webcams. I remember watching and thinking that I could be way funnier but didn’t have the courage to submit my own video.

When I moved to Winnipeg, I couldn’t stop thinking about comedy and I googled “How to do stand-up comedy.” The internet told me to write five minutes of material, call my local club and ask about amateur nights. So that’s what I did.

But I told my first joke and the crowd laughed and honestly that’s a feeling I will never forget. It was like in those few seconds that I was listening to strangers laugh at something I wrote, I knew exactly what I wanted to do with the rest of my life.

So here I am, ten years later, ten years older, broke, living in a new city, and excited for what the future has to offer.

You talk about very real and serious issues in your stand-up, including alcohol addiction and growing up disconnected from your culture – do you think that the audience is more receptive to talking about these issues through humour?

I think so. I know on a personal level, my healing process with anything in life always involves humour. I’m a firm believer that we can’t start healing from something until we can laugh at it.

With that being said, I am also the king at laughing or making jokes at inappropriate times because my default method of coping is humour. But I think that when we are able to see the ridiculousness of the things that trouble us and we can laugh or chuckle about those things, then we are on the verge of letting go of those things.

As I have progressed in my stand up career, my comedy has more or less focused on the issues that affect me personally. Comedy is supposed to be relatable, nothing brings a room full of strangers together quite like laughter.

Once you realize that, you kind of just start testing how far you can go, figuring out what you are smart enough to talk about on stage without totally offending someone. I definitely think that once you disarm people with humour, they are more receptive to talking about issues like addiction and race.

Don’t get me wrong, comedy is comedy and we do it for the laughs. That’s the main goal, but, personally speaking, if I can tell a joke about racism or addiction that isn’t punching down to get the easy laugh, and people enjoy it, maybe they’ll talk about those issues afterwards and see things from a point of view that they wouldn’t have otherwise.

I think that for the most part the people who saw the show generally had the same reaction. Most people came out and enjoyed it and learned some things about Canada’s history that they maybe didn’t learn in school.

I’m not going to lie though, there were definitely a few places that weren’t very receptive at all because the show was billed as a Canada 150 celebration. I guess maybe it was, but Mary Walsh and the other writers didn’t shy away from telling Canada’s true history. For our opening number the entire cast ran out and sang “The foundation of our nation is a big fat lie” and then for 90 minutes we basically told people that all the lovely things they know about our country’s creation were wrong or slightly skewed to make our history seem better than it was.

I wish more Indigenous communities got the opportunity to see it, but I also understand that as an Indigenous person you don’t want to celebrate the history of the country that tried to wipe you out and who continues to give us minimal support and neglect our well-being.

You’ve mentioned in past interviews that you would not have turned down such a great offer from Mary Walsh, but were initially worried that you would be asked to play “the stereotypical stoic Native man” in the show. Is that a conflict that you’re often faced with? How do you approach that balance between pursuing your career and avoiding stereotypes?

This was the first time in my comedy career that I had done something of this magnitude. I’m mainly a stand-up comedian and really haven’t acted much outside of Mary’s show, so it was a new experience and a step outside of my comfort zone.

As a stand-up I don’t really have to worry too much about people wanting me to be a stereotype because when I’m on stage I’m alone and in control, so it’s fairly easy to avoid stereotypes when I can make fun of them.

In stand-up comedy, as an Indigenous person, I do have to kind of watch out for instances when someone books me to fill a quota or balance out a mostly white show. But those opportunities are chances for me to show myself and the rest of the world that we as Indigenous people can hang with the rest of them, that if you put me on a show to be your token brown guy then I’m going to do my best to bring it harder than anyone else on the roster.

Honestly, I have no idea what’s next for me. I just moved to Toronto to try to give myself the best opportunity at a comedy career as I can and the future is unknown right now. I’m excited for it though, I am basically starting fresh in a new city where my credits from Winnipeg mean nothing and I have to pretty much start from the bottom and grind my way out.

It’s a challenge that I’m excited and nervous about but I feel like it was the best move for my career. I will be going back to Winnipeg on June 29th for a stand-up comedy show at The Park Theatre so if you’re in the area look me up and come see the show!

Where can people learn more about (or see) your work or get in touch?

I’m always posting about shows that I’m going to be on or open mics that I’ll be at. If you’re in Toronto come out, catch a show and don’t hesitate to approach me after to chat about anything.

November 27, 2021
This Meet The Artist series highlights amazing and talented performing arts professionals from diverse backgrounds. Trinidadian-born saxophonist and composer, Jesse Ryan, has been praised as a fresh new voice, with a unique perspective on the...
END_OF_DOCUMENT_TOKEN_TO_BE_REPLACED