Started in 2018, the Indigenous Artist Spotlight series is intended to foster greater awareness and understanding of the strength and diversity of Indigenous art available in Ontario and beyond. As Indigenous and non-Indigenous artists face an incredibly difficult time, we will continue to spotlight inspiring Indigenous artists.

Find all of our past Spotlight interviews here. 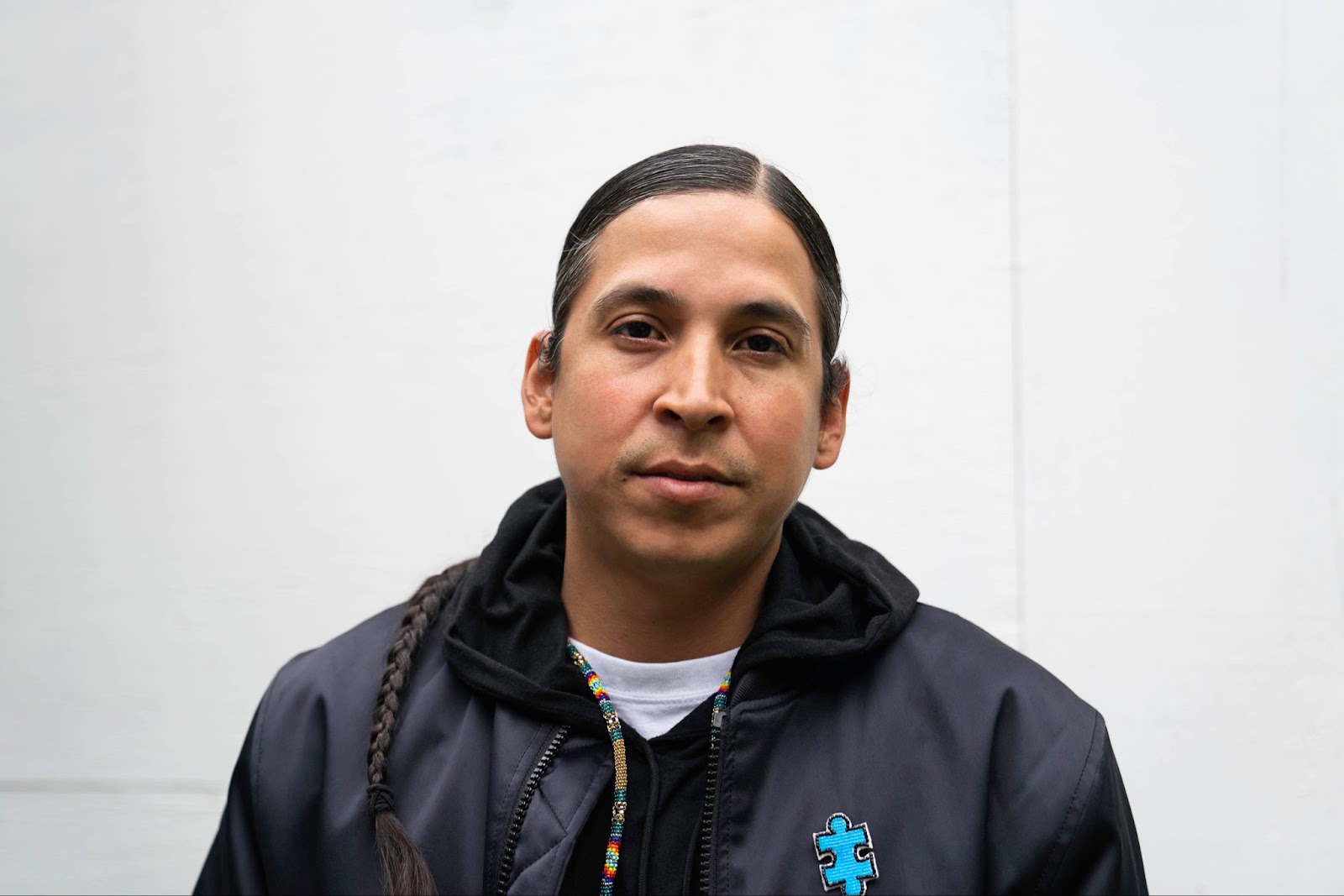 This month we spoke with Juno-nominated Pow-Wow singer/song-maker, Bryden Gwiss!

(Introduces himself in Anishinaabemowin.)

It’s just a protocol for Anishinaabe/ native people to introduce ourselves in our language. We always introduce ourselves in our language when we begin a prayer or when we are introducing ourselves to the world for example. My name is Bryden Gwiss. I’m Bear Clan and from Cape Croker Reserve. In the language, we call it Neyaashiinigmiing, which just means land surrounded by water. So it’s not quite an island, it’s a peninsula. I currently reside in Sudbury.

I recorded my first album in 2016. Before that, I was a Pow Wow dancer and singer; I grew up singing at Pow Wows. And my friends encouraged me to do an album because a couple other artists were doing it and they thought that mine should be acapella. But I wanted to do something different so I came up with the idea to add hip-hop beats to the Pow Wow songs. I loved music when I was growing up and my very first experience making beats was in a video game called Funkmaster Flex music generator or something like that. It was for a PlayStation two. At that time, there was no Facebook or Youtube, and I was born and raised on a reserve so what we had were hand drums and Pow Wow singers. So when I was a bit older, I got an iPhone and used Garage Band with all of its bells and the rest of the software to record an entire song.

My first album was called Round Dance and Beats or R&B. I recorded it with Tribal Spirit Music. And that was nominated for the 2017 Juno Indigenous Music Award which was pretty amazing. After that, I pretty much got thrown into the music industry. I’m still a baby, still learning but I’ve run into some pretty awesome people on my journey so far.

Who are some of the people that you’ve met on this journey?

The very first person I met was Randy Wood, a 2-time Grammy-nominated Pow Wow singer. He’s from West Hastings, BC. Back then I listened to him on a cassette tape. It wasn’t even a CD. Later down the road, I met up with Cris Derksen, she’s Cree and Mennonite. She’s awesome and was also nominated for a Juno orchestral Pow Wow. We did a little tour with her in BC. It was great to learn about the stage and lingo. We’ve chatted about my career as well. And then there’s GR Gritt. He lives here in Sudbury as well. He’s a pretty good mentor and friend.

You said that you were encouraged by your friends and family to record your Pow Wow music but do you have any personal motivation for the music that you produce?

I always wanted to get into music but I didn’t know how to. So the nomination in 2017 was exactly what I needed.

My second album, released in 2020 is called The Forgotten T.R.U.T.H.- T.R.U.T.H. stands for The Real Un Told History. It’s named after the last song on the album which is a rap song. It was my first time rapping or even writing a song with verses and a chorus. But in that song, I tell my story of growing up on the reserve. I’ll just give you a couple of examples: within the first six years of my life we had 5 house fires; when I was seven my uncle committed suicide because of all of the trauma of the Residential Schools. I also had a heart operation when I was seven. I remember there were these two young men that went off reserve to go to a party at Lionshead, which is about 40 minutes away outside the reserve. And they went to a party and they’ve never come back since. There’s no evidence, nothing of what happened to them. And there was nothing, no story, no news, nothing.

That’s my purpose in music, to help encourage our people, and share our culture and our history. Cultural rejuvenation is critical and popular right now. All of our history is genocide but the youth today want to learn more. They want to learn about the language and the song ceremonies and the treaties. So I want to teach the youth and Canadians the history and culture of my people through music. Music is an international language.

Thank you so much for sharing those stories. Even though it makes me emotional to hear the truth, it’s important, because, as you said, the youth want to learn about it. And I think that we owe it to them to teach them so that they don’t repeat the mistakes that the generations made before us.

I don’t have a good follow-up question for that. So I’m just gonna change this up completely if you don’t mind. What projects are you working on? You said you have an album coming out. Is there anything else that we should look forward to?

Actually, I did some work with Red Sky Performance. I’ve worked with TSO, Toronto Symphony Orchestra on a play called Mr. Tim. It’s about reconciliation and is the story of a young native girl, and, a young native boy who’s trying to train a wild horse. The boy is whipping the horse and trying to break him while the girl spies on him. Eventually, she teaches him a new way to train the horse. It’s a really cute story and a really good play.

I’m also working on my third album. It’s going to be a six-song album of Pow Wow-influenced music. There are going to be verses and choruses in the songs, a mixture of genres like reggae and kind of new-age country-type song.

Has the pandemic impacted you at all?

I’ve been pretty busy. I also work part-time with Shkagamik-Kwe Health Centre here in Sudbury. I give hand drum teachings and drum etiquette teachings. Right now that’s virtual so I have to record videos of myself singing. I also work full time for this organization called Nogdawindamin Community and Family Services in a cultural department. We service seven reserves and what we do is we help youth who have been apprehended. So we contact their close family members and community members first as the goal is to have them reunited with their moms and dads. In a lot of cases, the parents are ignored so we try to reunite them with their kids.

You have so many outlets for doing good. It’s really an honour to speak with you. You piqued my interest with something that you said earlier so as my last question, can you give us two quick drum etiquette tips?

Well, the number one thing is respect. When we’re around our drums we always have to be respectful, you can’t be under the influence of drugs or alcohol. We’re always in a positive state of mind and respectful to each other. You can’t be goofing off and hitting each other with sticks like the young boys I teach sometimes want to do. You can have fun and laugh but within reason. And always keep the area around your drum clean. No garbage and those kinds of stuff around the drum.

Thank you to Bryden for sharing with us!
Photo Credits: Danielle Khan Da Silva

September 9, 2022
The Meet The Artist series highlights amazing and talented performing arts professionals from diverse backgrounds.         We’re back with this month’s featured artist. We encourage you to watch...
END_OF_DOCUMENT_TOKEN_TO_BE_REPLACED