Started in 2018, the Indigenous Artist Spotlight series is intended to foster greater awareness and understanding of the strength and diversity of Indigenous art available in Ontario and beyond. As Indigenous and non-Indigenous artists face an incredibly difficult time, we will continue to spotlight inspiring Indigenous artists. The next several spotlights will feature artists who will perform at the inaugural Nogojiwanong Indigenous Fringe Festival.

Find all of our past Spotlight interviews here

This month we spoke with comedian D.B. Mcleod 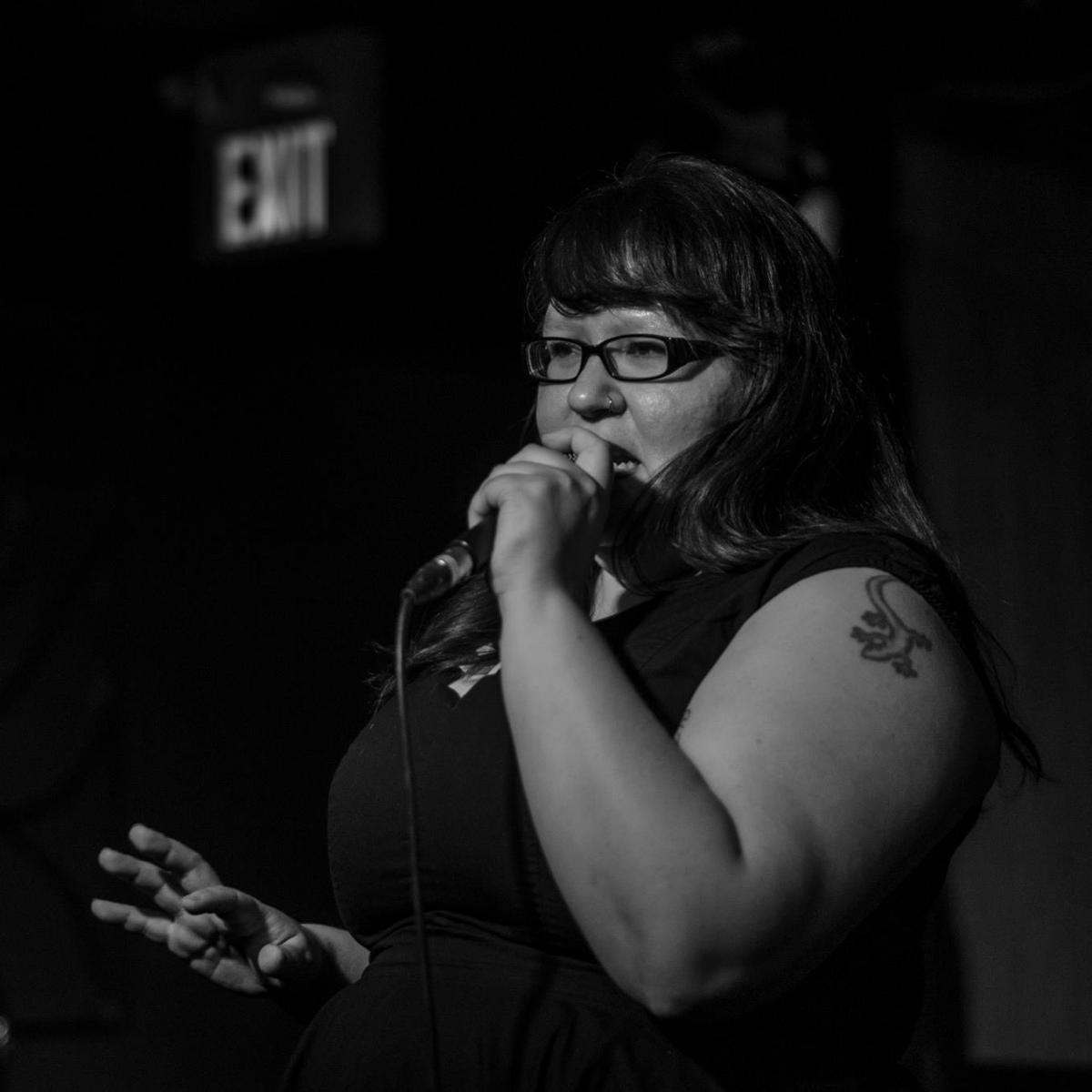 To start off with, can you tell us a bit about yourself and your artistic practice?

My name is Denise. And I am Anishnaabe, my family’s traditional territory, my traditional territory, is Sagamok Anishnawbek First Nation, that’s where my father’s people are from. My mother’s people are from the Perry Sound area but because of the Sixties Scoop, I don’t actually know too much about my mother’s nation or anything like that. Her father’s Native, her mother’s white, I know that I have to explain my lineage to a lot of people, so I always start with that.

But I was also part of the Sixties Scoop, I was like that last generation, in the 80s. I was scooped up and lived with non-Indigenous people and have lived in Toronto since I was about 13. I grew up in the Northwest of Toronto, Jane and Finch specifically.

So my artistic practice, which is weird to say, is largely stand-up comedy, which I would liken to storytelling.

You’ve said in the past that you see comedy as a form of resilience. Did you always use comedy as a survival tactic? And how did that lead to stand up?

I guess I’ve always been funny. That’s the one thing that everyone would say, “Oh Denise is really funny. “

Stand up is entirely accidental. Or maybe not, maybe I was supposed to. I’ve always had a dark sense of humour, a dry sense of humour. And Celeste Hayward, one of the founding members of Manifest Destiny’s Child [a collective of Indigenous women stand-up comedians of which D.B. is a member], had taken a class called Comedy Girls with Dawn Whitwell at the Comedy Bar, which is all a lot of information… I’m going to take you around the block instead of across the street, as Indigenous people do.

Anyway, Celeste had taken this comedy writing workshop with Dawn and then had approached Dawn with, “You know what would be great? We should do an Indigenous version of this?”… Dawn, being non-Indigenous, was like, “I would love to be able to create space for Indigenous women to write jokes.”

I saw the ad for it but didn’t really think anything of it. But then my friend Stephanie Pangowish who is also in NIFF, cornered me one day and was like “You’re really funny, you’re doing this with me.” There was no option, it was just like, you’re doing this.

And so I did it and hey the rest is history.

I sort of fell into comedy and I find it very familiar and I really like telling jokes. I don’t necessarily know the comedy scene per-say. I don’t really go to open mics unless they’re queer, female, BIPOC-friendly, like a very specific open mic I’ll go to. But ya I don’t really participate in the comedy scene because, you know, largely it’s not really for people like me.

Ya I think so…  the privilege of being cis-gendered, but there are a lot of amazing cis-gendered women who are creating comedy spaces for others… like BIPOC women creating spaces for BIPOC women to tell jokes. Like Yas Kween – a comedy show in Toronto that happens the first Thursday of every month… So ya, there are starting to be spaces where BIPOC folks and particularly BIPOC women can take the stage and take up space.

Your other jobs outside of comedy are also fascinating. You’re a professor at George Brown and a Coordinator at the Toronto Birth Centre. How does your social work/community work interacts with your comedy and vice versa?

If you’ve ever done any direct service/frontline work with marginalized communities… you need to have a sense of humour. I teach about privilege, and oppression, and gender-based violence and how do we support survivors. That sh*t wears you down. Talking about that… three times a week, it’s hard work.

And so, even when I lecture, that comedy kind of comes out. And I also teach about urban Indigenous perspectives at George Brown. So when you’re talking about the history of colonization of Indigenous people, especially as an Indigenous person, doing all of that emotional labour, you have to find the humour, or you’re going to get burnt out…

So ya I do teach, and at the Birth Centre it’s largely focused on creating culturally safe space for Indigenous people and marginalized communities, and ensuring that the people that don’t have the ability to advocate for themselves are getting the best care that they can get, or that they need. I’m trying to make space for the folks who normally wouldn’t get midwives or be able to birth at a Birth Centre… 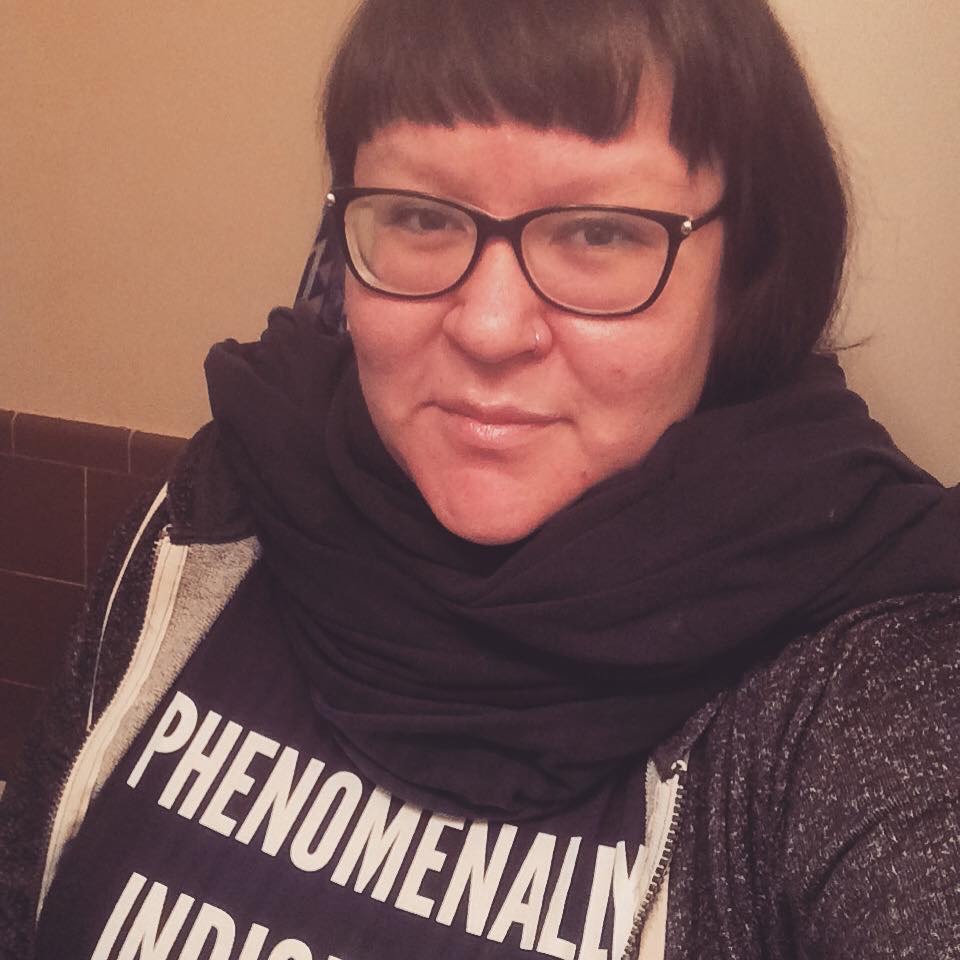 Especially when I’m teaching students, I try to teach “do as I say not as I do” because I’m awful at self-care. I’m awful at making sure that I take care of myself so that I can take care of community…  I do wear a lot of hats, so there is a lot demanded of me. And I have a really hard time saying no…

To that point of the mainstream comedy world still being white, and male, and not very welcoming… Do you have any thoughts on what presenters can do to be more supportive of changing the comedy world in that sense?

Ya. I mean, even female comedians, largely… are like beautiful women… We’re still so consumed with this Western standard of beauty… we still live in a white supremacist society. And I’m not saying that the KKK are marching down the street in Toronto… but like when I’m asked where I’m from, and couldn’t possibly be Canadian! Whereas my partner, who is first-generation Canadian from Malta, won the DNA lottery and is very fair and has blue yes, has never once been asked where they’re from… It’s so interesting… these microaggressions… it’s so internalized and insidious that we don’t notice that Canadian is synonymous with white, or even comedians are largely beautiful…

So what it is is really holding themselves to task. Like ok, “we’re going to book comedians…” who do we have?” Not in this token way… but I think we just need to be more mindful. We fall into what we know.

And largely, it’s also very surprising that people want to see a loud, fat, queer, Indigenous women be like… here’s the f*cked-up-ness with colonization, let’s talk about it.

Has there been any shift over the last few years in terms of how receptive audiences are to that kind of conversation?

It’s very strange. When Manifest Destiny’s Child started, it was in the beautiful, sweet innocent time of reconciliation, so people were really clamouring to book us, white people were like “ya, hold us to task!” It was very interesting.

There was one time that I got asked to do a set for some sort of environmental fundraiser at The Comedy Bar. And… this big, bro-y kind of white guy, comes up to me after and was like “I really liked what you had to say. You’re really funny and I learned something.” And I was like “What is happening?!”

So I think that people are willing to listen, but… people don’t want to feel guilty… when we talk about reconciliation, or residential schools, or colonization in a real way, people are like “Well I didn’t do this, I don’t know why I have to feel guilty.” But when you talk about it in comedy they’re like, “Huh, that’s really funny, I’ve learned something, I’m going to be a better person.” Like “That person made me laugh when we talked about her being scooped up through the Sixities Scoop.” Super traumatic event for me, I’m gonna make it funny and people are gonna be like “Oh, I want to learn more about that thing.”…

Find D.B. at @DBMcleod on Twitter or get in touch

This interview has been edited for clarity and length. Thank you to D.B. McLeod for sharing with us!

November 4, 2022
Our Meet the Artist series highlights amazing and talented performing arts professionals from diverse backgrounds. Over the past 4 months, we shared profiles featuring a few of the phenomenal dance and theatre artists participating in Gathering...
END_OF_DOCUMENT_TOKEN_TO_BE_REPLACED