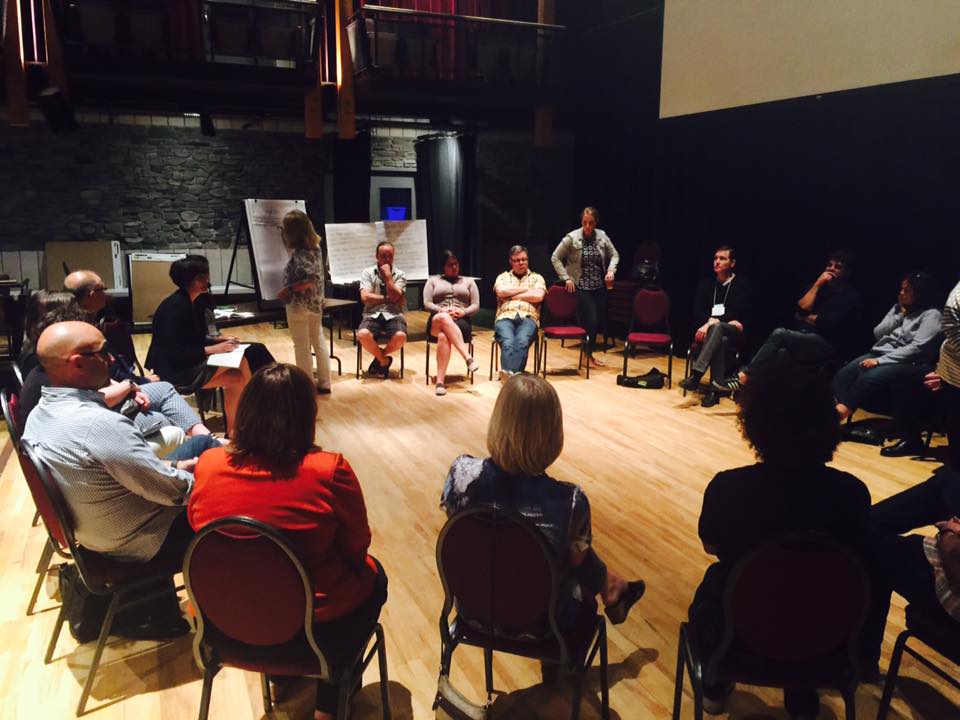 This year, Ontario Presents had an overwhelming attendance to our Spring Retreat in Parry Sound where the Charles W. Stockey Centre for the Performing Arts hosted more than 50 individuals from 26 organizations:

The retreat began with a delicious three course meal at Bistro by the Bay, providing an excellent opportunity for networking and catching up with old friends. For some of OP’s newest staff members, the opening dinner also proved to be an excellent way to meet a plethora enthusiastic and passionate members.

The following day was chocked full of events including OP’s Annual General Meeting where the annual and financial reports were discussed and a bittersweet ending as OP bid farewell to Board President Colleen Clack. Warren Garrett announced that OP’s new mentorship program would be aptly named the “Colleen Clack Mentorship Program” in honour of her contributions to the organization. More updates on the program coming soon!

At the annual meeting, the members elected two new directors to the board: Glenn Brown, Theatre Manager of the Sanderson Centre in Brantford and Ronnie Brown, Marketing & Development Coordinator, Oakville Centre for the Performing Arts. The Board also appointed Jayson Duggan as new President of the Board. Colleen Clack, Deputy CAO, City of Guelph will continue to serve on the OP board in the role of Past-President. View full update from the board.

Upon arrival at the Stockey Centre, Ontario Presents’ own Brian McCurdy gave an insightful presentation on “The Evolution of Presenting Practice”. Throughout Brian dissected his 3 part model, that highlighted the importance of arts presenting organizations to align themselves with their municipality’s cultural plan.

Read Brian’s full paper on “The Evolution of Presenting”

After, the group was then split into two round tables: The first was a discussion moderated by Ronnie Brown, Coordinator of Marketing and Development at The Oakville Centre for the Arts on Block Booking.

The second was on succession in the arts and culture sector, facilitation of mentorship for the next generation of managers and exploring new avenues for mid-career renewal. The session was actively led by Richard Poore from the Victoria Playhouse Petrolia.

Read the notes from the Succession in the Arts session

After lunch, the group once again, split into two groups:

The marketing session was lead by Julie Fossitt, Marketing Manager at Grand Theatre - City of Kingston Cultural Services with a brief overview of Environics data analytics software by Judy Harquail. The main focus of the session was the collection of data and how to use it in marketing strategies and tactics as demographics are identified. It was an interactive session that used Environics as a tool for framing marketing plans to specific audiences.

As a result of the marketing sessions at the OP Spring Retreat, a Facebook group has been created to share, discuss, suggest and ask about marketing, audience development, communications and promotion of members theatres. Join today!

“The New Narrative for Presenters in Ontario” session was lead by Suzanne Haines, Executive Director at The Burlington Performing Arts Centre.  Suzanne led the group through the work to date of the New Narrative Task Force outlining the purpose of the work (listed below).  The group heard a compelling story of the value and impact of performing arts presentation with industry stakeholders while focussing on the development a new set of metrics that accurately reveal that impact. Suzanne took the group through a process of identifying themes for the narrative and building language to feed into the New Narrative Task Force’s work.  Members will have another opportunity to impact the outcome of the new narrative throughout the process.

The net result of the work of the new narrative is to come up with a document that positions presenting activities in the cultural ecology to build improved understanding of our role.  The document will be supported by metrics for which we want to be measured, a communication strategy, education and tools to deliver the message to external stakeholders.

There were then two following roundtables on “Contracts, Insurance and other ‘fun stuff’” facilitated by Eric Lariviere in addition to another discussion on Strategic Planning.

Notes on these discussions *Coming Soon*

The day concluded on a relaxing, gorgeous boat cruise of the Georgian Bay. 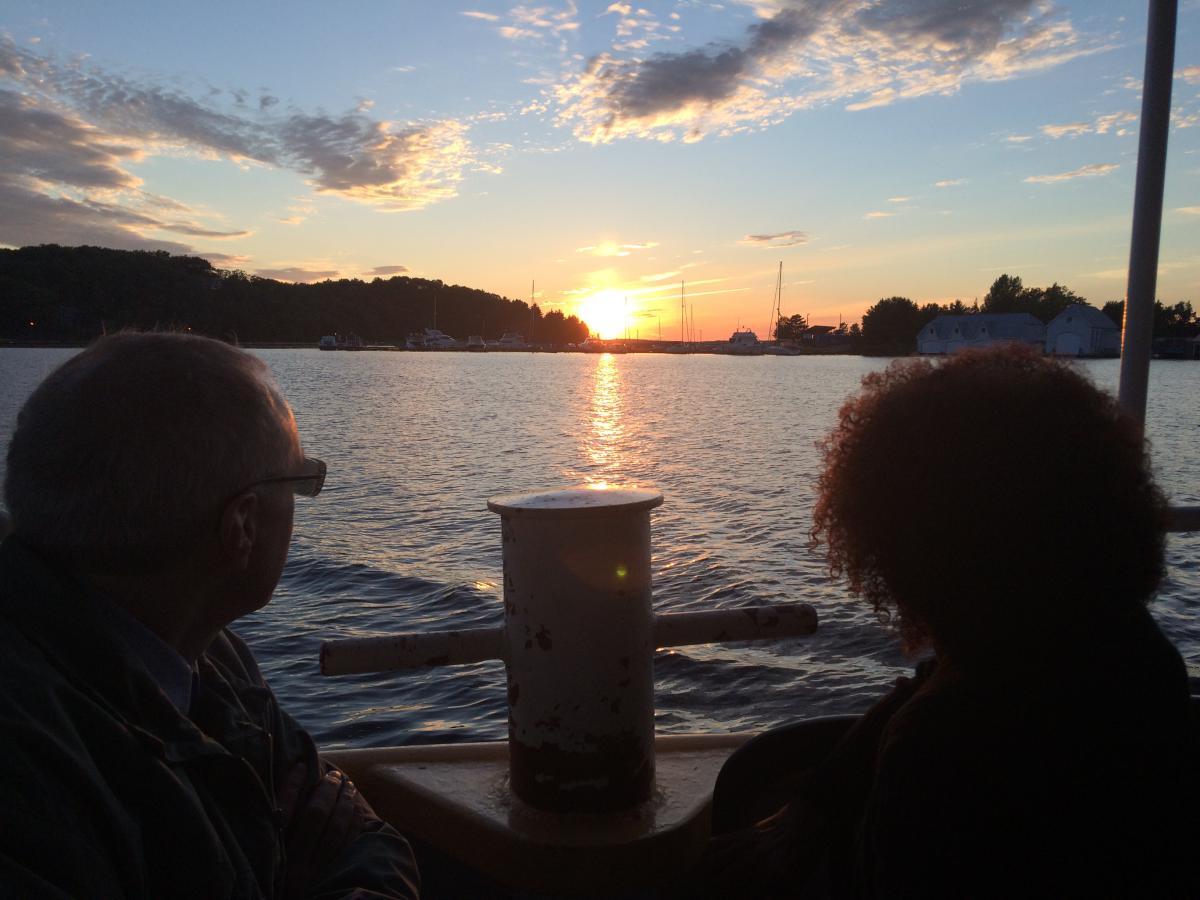 View more photos from our retreat

The final morning began with updates from Gail Ferrin and Jane Marsland on CELP (Community Engagement Learning Platform) that is to be launched in September of 2016. The project is funded by Canadian Heritage and the Ontario Trillium Foundation, with the objective of assisting presenters to take on a vital role in community life. CELP also intends to host 4 to 8 workshops throughout Ontario in the coming year, starting in Fall 2016.

Sue Urquhart from CAPACOA made a presentation on the organizations most recent project involving Cole Alvis from IPAA (Indigenous Performing Arts Alliance) that seeks to connect mainstream presenters with Indigenous Artists and is currently seeking support from venues. She also spoke of CAPACOA’s research project on the connection between the arts and developing a sense of belonging.

Judy Harquail concluded the updates with an exciting announcement of OP’s partnership with the IAMA Conference from 10 to 12 of November 2016 for managers, presenters, promoters and producers. The conference will be taking place at Koerner Hall, Roy Thompson Hall and the Aga Khan Museum with a diverse roster of speakers and performances.

The final presentation was on the changes to the Canadian Cultural Spaces Fund by Nadine Sivak from Canadian Heritage.

Read the full notes on this session

Jane Marsland led a session, “Charting Our Way Forward” in which the Presenters group had inspiring conversations on how to improve their relationships with booking agents. Some suggestions that came out of the situation include: finding ways to get agents to attend more OP events, a session that involve communication between agents and presenters at Ontario Contact, a focus on relationship building rather than a purely transactional experience. The Marketing session re-grouped for a concluding session where they determined action items to move forward in their respective roles in the sector. Some ideas that came up were a Facebook group for marketers, reporting through environics, re-branding for Ontario Presents as a marketing supporter for member activities, seasons and tours in their individual organizations.

Read the full notes on this session

The retreat ended on a determined note with Judy Harquail asking the group to articulate in one sentence what they would do the next day to apply something that was learned or highlighted as a needs. We would like to thank the staff at the Stockey Centre for hosting and of course our participants for contributing to the lively conversations that will help the sector move to an even brighter future.

Please follow us on Twitter @OntarioPresents and use #OPSpringRetreat to see our live tweeting of the retreat!

View photos from the retreat!

September 9, 2022
The Meet The Artist series highlights amazing and talented performing arts professionals from diverse backgrounds.         We’re back with this month’s featured artist. We encourage you to watch...
END_OF_DOCUMENT_TOKEN_TO_BE_REPLACED